The stage was set for Saturday, 3rd June 2017. The track was marked out, the weather perfect and our new field looking the part in readiness for the day’s events. Everybody arrived on time, wearing house colours, ready do their bit for their House.

The events kicked off with the Year 6 mixed 800 metres. This race did not disappoint, and really set the tone for the rest of the day, with Julianne Littler running in the first victory of the day and getting Rothschild off to a flying start. The senior boys’ 800 metre race then followed with a hard fought and tactical race, won in the end by Time Numpituckchaikul, setting a blistering pace from the outset and managing to cling on to claim the victory for Byron. It was then the turn of the senior girls to set the final example for the juniors, and they did this exceptionally well with Antonia Erhmann (Byron) winning race one, and Emmer Wang bringing home the first victory for Churchill, in the second 400 metre race.

Having been shown the way by the Prep and Senior School, an extremely excited and determined Pre-Prep stepped up to the start line. Again, all the races proved extremely exciting and showed that there is an exciting future for athletics and sport here at Harrow Shanghai.

With all the first events out of the way, the tone and competitive family atmosphere was set and led to an extremely entertaining day’s event. There were too many outstanding performances across the Pre-Prep, Prep and Senior Schools to mention each and every one! However, it is important to point out that many of the most memorable moments of the day didn’t always come from those winning the races, but often those giving their all to pick up those extra, all important, points for their Houses. All participants can be very proud of their individual efforts.

Towards the end of the day and after a short but welcome break for lunch, happily supplied by the Kerry Hotel, Pudong, came the all-important relays. This proved to be an exciting competition, with close races in all the categories, tipping the overall results in the house competition at the end of the day. 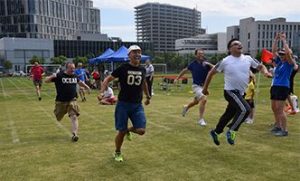 Then came the race to end all races – the Dads’ 60 metre event. This was a testosterone-fuelled mix of muscle and men trying to look as if they did not care if they won or not! However, it was ‘dog eat dog’ and ‘every man for himself’ once the gun had fired! The winner, Mr Jia (Shirley Jia’s father, Year 2), crossed the line for victory, passing the commotion as Mr Erhmann stumbling ten metres from the finish line.  He fell like a thoroughbred at the last fence in the Grand National – the gasp from crowd palpable, and only broken by the hysterical laughter of his children!

The next event was a stand-alone event called the ‘Lowe Mile’. This is an event run on our cross-country course and named after Harrovian and double Olympic 800 metre gold medalist, Douglas Lowe. All pupils are invited to take part, with at least one competitor from each House. Ben Cook took the honours in this prestigious event and won in a time of 8 minutes 29 seconds, setting the record high for the event in the future.

The final race of the day was the all-important staff relay, for bragging rights in the Common Room! The Byron staff took the victory, with Head of Prep, Jon Horsnell, chasing down an injured Head of Pre-Prep and Early Years, Paul Cunningham (Churchill), in the last 50 metres, like a ruthless lion chasing down a lame gazelle on the Serengeti!

The final house standings for the pupils were as follows: